Learn about the Florida Keys vast history and unique geography 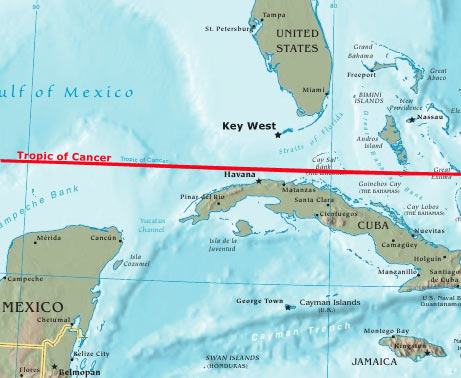 The “keys” are a chain of rocky islands, stretching some 180 miles from Biscayne Bay to the Dry Tortugas. On the north and west they touch the shallow waters of Florida Bay; on the east and south lie the deeper waters of the Straits of Florida and the deep-blue Gulf Stream. The City of Key West is 80 miles farther south than the southernmost point in Texas, hence, Key West is known as the “Southernmost City”. This is really a lower-48 designation as Honolulu, Hawaii is 193 miles farther south than Key West.

In the climatic sense, the keys belong to the tropics, even though the Tropic of Cancer lies 70 miles south of Key West. The Tropic of Cancer is located at 23.5 degrees north; Key West is located at 24.44 north, as shown in the map. Summers are warm – average 82 degrees, record temperature 95 degrees – and are wetter than the rest of the year, as the trade winds bring moisture-laden clouds from the Atlantic Ocean. Winters are pleasant – average 71 degrees, lowest temperature 41 degrees – but the warm air is usually displaced three or four times in the season in short cold spells, as cold waves reach down from Canada.

The upper keys are the bony skeleton of an ancient coral reef, 10,000+ years old. The lower keys were formed or egg-shaped limestone particles cemented together in a form of rock called Miami oolite. Both overlie about two miles of limestone deposited by tiny marine animals, foraminifera, on top of submerged foothills of the Appalachian Mountains. Pieces of the white Key Largo limestone can sometimes be found that have metamorphosed into calcite crystals, yellow and sparkling.

Christopher Columbus “discovered” the New World in 1492, when he landed in the Bahama Islands. Juan Ponce de Leon, a Spaniard who had been with Columbus on his second voyage, is credited with being the first European to land in Florida, on Easter Sunday, 1513. The name of the new land was taken from the Spanish name for Easter, Pascuas Florida.

Spanish attempts at colonizing Florida were ineffectual, except for a military post at St. Augustine and the Indian towns across the peninsula to San Marcos (St. Marks). But Florida was valuable to Spain because of the shipping routes, south along the west coast, north along the east. When British and colonial troops captured Havana in 1792, Spain ransomed the city by trading all of Florida for it, in 1763. Britain returned the region to Spain in 1783, rather than see the young United States seize it. Then, in 1818, the United States bought all of Florida from Spain for five million dollars.

Key West was the first permanent settlement in the keys, 1822. Monroe County was formed in 1828, and included all of Florida south of Lake Okeechobee. Florida became a state in 1845. Six other counties were created out of the inhabitable portions of the mainland of Monroe County, leaving only the southwest tip of the peninsula and the keys. Almost all of the remaining mainland has been incorporated in the Everglades National Park; in effect, Monroe County is the Florida Keys.

Many of the early settlers came to the keys from the Bahamas, where the queen conch, a large marine snail, is a staple food. For the reason, their descendants are often called “conchs”. Although mainlanders have used the term as an insult, natives consider it a compliment. In either case, the “h” is silent, and word pronounced as if it were spelled “conk”.